So, what’s the best way to choose the best freelancers for your web or app development project? The answer is to use a platform, such as Hiremotely, that offers skilled, hand-selected, and fully-screened freelancers.

There’s no doubt about it, hiring remote programmers for software development can be a bit of a finicky process. Not only are there thousands of freelancers to choose from on dozens of different freelance platforms, but you’ll also find freelance rates varying from the bottom of the barrel, dirt-cheap hourly rates too much more expensive, salary-topping monthly retainer fees. 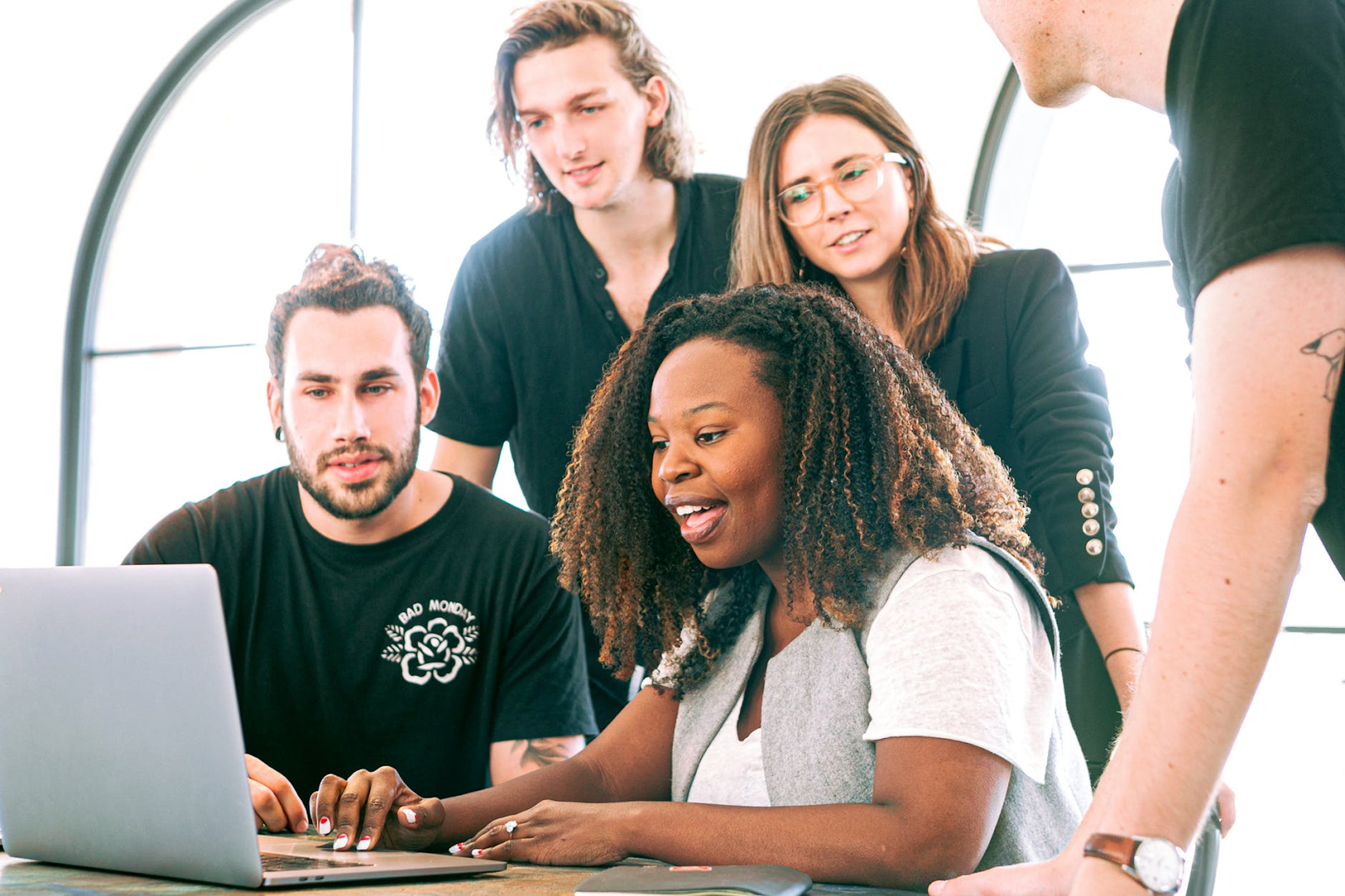 So, what’s the best way to choose the best freelancers for your web or app development project?

The answer is to use a platform, such as Hiremotely, that offers skilled, hand-selected, and fully-screened freelancers, based on your project criteria, rather than leaving it up to you to sift through thousands of random freelancer profiles.

So with that in mind, in the following article, we’re going to the reasons why hiring hand-selected talent via Hiremotely is a better choice than hiring at random via other freelance platforms. So let’s dive in!

Whether you’re one yourself or you’ve ever worked with one, you already know that developers tend to have a burning desire within them to hone their skills, improve their techniques, and become the absolute best at what they do in their field of work.

In any case, the best coders and developers enjoy doing things the right way. This not only leads to better software development in the end, but it also leads to a better work environment as a whole, where quality is held to the highest degree of standards.

And when you create this type of work environment, where quality is non-negotiable, you’ll inherently attract the best developers to your team. You know, the ones who want to become the best possible versions of themselves, by providing you with the best possible service in the industry.

According to a 2019 study by HackerRank, the ability to learn and grow professionally are the top two leading factors that influence a developer’s decision of whether or not to accept a job offer from a company. Therefore, if your project’s work environment does not offer the ability to learn and grow, you’re not likely going to be able to find the best talent in the industry to develop your software.

With this type of poor work environment, you’ll not only prevent the best developers from wanting to work with you, but you’ll also be compromising the quality of your entire workforce, which will lead to a reduction in the quality of your final product.

If you know anything about software development, you know that this can be torture to get stuck working with a poor-quality codebase. But this is exactly what happens when you cut corners, and provide your development team with a low-quality work environment where they’re unable to grow and thrive.

You’re just not going to be able to find the quality developers that you need to create a successful software application. But on the other hand, by creating an environment where you freelancers can learn, grow and thrive, you’ll practically have the world’s best developers lined up at your front door, just waiting for you to hire them.

Just remember that A players always hire A players.

If you consider yourself an A player, but you’re hiring B players, or C players, or D players, just to save on your software budget, you’re going to regret it in the end.  End of story.

That’s why it’s important to remember that paying for a more expensive freelance developer on Hiremotely is definitely worth it. This is because they’re going to be in it for the long run, instead of getting hired just to make a few quick dollars from you.

You want someone who’s going to be working with you from day 1, as well as being there to work on any bugs or errors that might pop up after launch. Your initial cost might be higher compared to hiring a basic freelancer on another platform, which is due to two factors: the fact that freelancers on Hiremotely often cost more per hour, and the fact that they’ll likely give you a longer, yet more realistic, estimate on the length of time needed to complete your software project.

If a developer tells you that they’ll be able to have your project completed overnight or in an extremely short time frame, you’re better off looking somewhere else. The best developers will be curt and honest with you.

They’ll often tell you that it will take them several days or weeks to finish your project (depending on the complexity), and this is because quality software isn’t something that just happens overnight.

And even if a developer is able to throw your project together in less than 24 hours, it’s likely to be put together quickly and they’ll most likely cut a few corners just to get the job done on time.

In this case, sure, you got your project finished quickly but is your finished product a high-quality product?

Even if it is, you’re still likely going to run into issues later on down the road (due to cut corners) when bugs and other errors start to arise in your application.

There are literally hundreds of thousands of freelancers you can hire for your software development projects. I mean literally, you can probably post a job on a freelance platform in the next ten minutes, and you’ll have dozens of candidates applying to your job within a couple of hours.

And a huge percentage of them are even likely to offer to do the work on your project for a dirt-cheap rate.  But that’s because there are literally hundreds of thousands of freelancers out there that see your project as a way to make easy money.

Quality Costs More (But Not All Of The Time)

Obviously, there are two ends on the quality versus price spectrum, neither of which you want to find yourself in. You can either cheap out and find freelancers with the lowest rates, which will likely result in a sub-par software application and a lot of other issues later on down the road.

Or, you can hire the most expensive freelancers you can find, in which case, you’ll only end up attracting developers who will do what you tell them to do, instead of actually doing the type of creative, innovative, and detailed work that you actually need from them.

Therefore, it’s usually best to look for freelance developers that offer rates that lie somewhere in between these two extremes.

These are the freelancers that know they have the right skills and abilities for the job, but they’re willing to work for rates that are lower than the world’s leading freelancers. This helps them offer more to their clients in terms of both affordability and good quality.

But in the end, quality should always be your top priority.

And you’re not going to find this by searching for the lowest rates in the industry, or by hiring the most expensive freelancers either.

Get Started On Hiremotely Today!

As I’ve already mentioned, there are literally thousands of freelancers out there, available for hire on dozens of different platforms.  And most of them are willing to work on your development projects for dirt cheap rates, often much less than $60 per hour (which is the average developer rate on Hiremotely).

And you’re absolutely free to choose to hire any of them, from any other freelance platform of your choice.  But the one thing I can guarantee that you won’t find elsewhere is the dedication and commitment of the freelance developers available for hire on Hiremotely.

Hiremotely freelancers aren’t just anybody’s from off the street. All of our freelancers are vetted to ensure that they’re both knowledgeable and fully qualified to take development projects of any magnitude.  Of course, freelancer rates are priced based on the experience of developers compared to other freelancing platforms.

So what are you waiting for?

Visit Hiremotely and find the best freelancers for your job today! 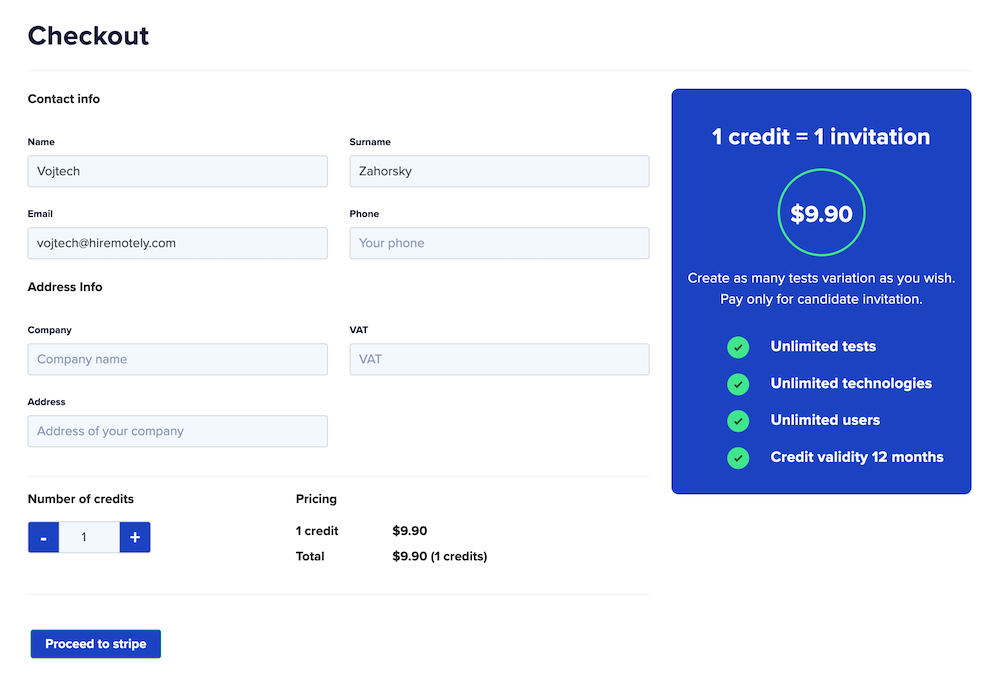 In this article you will learn more about pricing, what are credits for and how to buy them. More 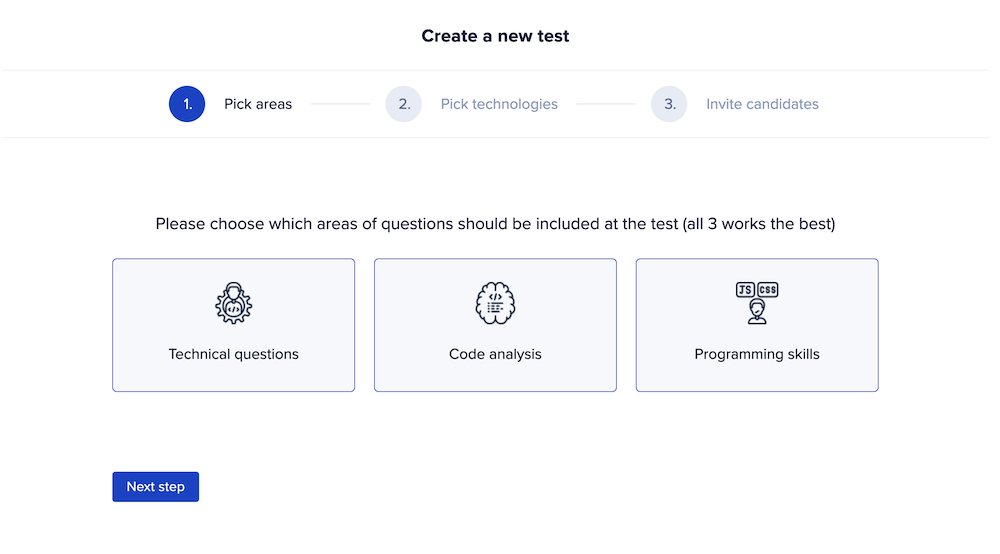 [Code Tests Resources] Which areas and technologies there are in the tests?

In this article you will learn more about Hiremotely Code Tests. We will explore which areas and technologies are available when creating the tests. More